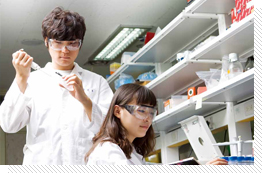 Biological Sciences, based on the understanding of each and every biological phenomenon in living organisms, is the cutting-edge scholarship which will constitute of the fundamentals in the 21st century knowledge-based society. The results of scholarship are being utilized for the enhancement of human welfare. Since the turn of the century, the College of Biological Sciences and Biotechnology has been making continuous efforts to reform learning, teaching and research environment by actively participating into the New University Regional Innovation (NURI) Project and the Brain Korea 21 (BK 21) Project. As the government designates the Chungcheon region as one of “National 5+2 Supra Economic Region” in which bio/pharmaceutical and medical industry will be specialized, the college is preparing for a new initiative, the establishment of the training center for bio/pharmaceutical and medical professionals to meet the needs of industry.

“Biological Sciences(BS)“ is undergraduate program for the education of necessary academic sectors in examining all the levels from the cell, the basic unit of a living creature, to an individual organism, population, and community. The course works of BS contain diverse subjects such as molecular biology, genetics, physiology, ecology, biodiversity and their evolution, and aims to cultivate competent people with a basic knowledge of bioscience and a high adaptive ability through various experiments, fieldworks, and actual practices as well as theoretical lectures. After completing these courses, students can enter relevant companies, or can become professors, researchers, and doctors by entering graduate school or medical school. Students who wish to become middle school teachers may choose the teacher training course.

The educational goal in the Department of Microbiology and Molecular biology at CNU is to meet the strong demands for research scientists and professionals in modern life sciences. The department has nine professors and several adjunct faculty members who are affiliated with research institutes or biotechnology companies. The current enrollment for the undergraduate program is 150 students. The graduate programs currently have 40 students in MS degree program and 30 students in PhD program.

Over the past 10 years, significant progress has been made toward developing excellent education programs and improving research activities and facilities. The curriculum is designed to make students acquainted with the basic disciplines of microbiology and molecular biology. Especially, for undergraduate students, the department offers intensive laboratory courses covering the whole range of microbiology and molecular biology. Research programs focus largely on the basic disciplines of life science at the biochemical, genetic, molecular and cellular level. However, many applied researches are also carried out in cooperation with industrials and governmental agencies. Since the CNU is located in “Taedok Science Town”, the department has developed cooperative research programs with the institutes and biotechnology companies in the Science Town.

The Department of Convergent Bioscience and Informatics majors in cutting-edge fields encompassing bio-health, synthetic biology, and various life science fields that utilize bio-based big data. Its goal is to nurture talents who will lead the development of the accelerating bio-industry centering on progressive life science and technology. It is a forward-looking department with courses.

In order to contribute to the welfare of mankind, such as disease treatment, food problems, and environmental problems, which require a convergent approach to technologies in the life science field, we operate a multidisciplinary curriculum to foster integrated human resources.